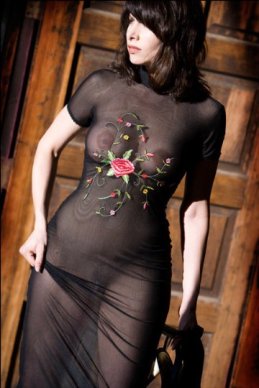 He couldn’t be serious. I held up the very sheer dress and shook my head. Then, I looked at his text again. wear what is in the bag and ONLY what is in the bag. Fail, and the consequences will be swift. Shit. He was serious. I pulled the practically transparent dress over my head. Naturally, the pretty rose, leaves and vines didn’t hide one damn thing! I know he’d threatened to dress me in a way that all of my “assests” would be shown, but I didn’t think he’d go this far! M god. I’d be arrested! My breasts, areolas, nipples, mound, and everything in between were plainly visible through the sheer material. And he expected me to go out in this??? Absolutely not! I wanted to obey, really I did. I HATE when I disappoint him in even the slightest may. Sure he’d been preparing me for something like this for weeks now, I was just too dense to catch on. He’d had me take off my skirt while we were in the car. Remove my blouse, leaving only my bra, when we were in the private car on the train, despite only a curtain separating us from the other passengers. I’d been cleaning house in the nude for weeks now. Still, He couldn’t be serious about this could he? At the last minute, I grabbed a long shawl and wrapped it around me. The doorbell rang and I opened it to find not him, but Charles, his driver. Seeing the shawl, Charles frowned, but lead me to the car silently. He opened door and I slid into the back of the limo. On

e look at Max’s face and I knew I’d made a mistake. Charles, lower the window. Laine, Take it off. Shit. He was going to humiliate me and allow Charles to watch. I took off the shawl, folded it and placed it on the opposite seat. All of it. I gapped at him. His eyes darkened and I knew I had no choice. I wiggled the dress off. Now, I was completely naked in heavy New York traffic. The windows were NOT tinted and several other people in cars were already gawking. I lowered my head and began to cry. Now see what you’ve done, Max said. “I gave you very clear directions which you did not follow. Lie on top of my lap and take your punishment like the good sub I’ve trained you to be. Then, you can put the dress back on.”

I gulped and nodded. His hand came down over and over again, hard, careful not to hit the same place twice. Charles had rolled down the windows, giving the other cars not only a visual, but an audio of my shame. Time stopped, but I could hear the jeers and encouragements from the other cars. Finally, Charles announced that we’d arrived. Max rubbed my swollen, red bottom and helped me put on the dress. Now, stand tall and proud, my love. Charles opened the door and offered his hand. Max came around the car and gave me his arm. Together, we walked into the Members Only Restaurant and I sighed in relief. Every member was part of the lifestyle. My attire would raise eyebrows, but would not offend anyone. I smiled at Max and whispered, ” I’m so sorry, Sir. I should have known better than to have doubted you.”