Our 3 days of renewal – Lion and his lioness – were altogether successful. By the end of the first day, I was in total submind and he, my Lion, was the Alpha in all ways. We ended the day with him giving me a wonderful foot massage! Not Alpha you say? Not at all. An Alpha takes care of what is his, which was excatly what he was doing. He had allowed me to remove my shoes after the first encounter on the dining room table. Once, however, I removed an article of clothing, I would never again (not in the 3 days anyway) put it back on. By the end of the first night I was without shoes, stockings, and g-string. He had pleasured himself (and me!!!) using first my mouth, then my pussy, then I pressed my breasts together, he drizzled warming oil on them, and he had fucked them, coming on m 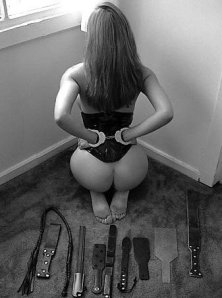 y throat and face. He gently massaged this into my skin, not allowing me to shower until the next moring. He had also inserted a small plug into my anus, which he left there throughout the night. By the first morning, I was so horny that I practically attacked him as soon as I woke up. He allowed me this pleasure, but assured me that I would pay for it – and I did. As soon as he finished, coming in my pussy, he cuffed my hands behind my back and arranged all of his spanking implements on the ground. Then, I knelt in the corner for what seemed like a very long time while he lectured me.

Throughout off of this, I was becoming more humble and excited by the minute. Yes. He WAS my Lion and I was happiest when I did serve him, even if it meant delaying my own physical pleasure. Let me assure you, that he used each and every implement on my ass, my thighs, my calves, my breasts, my pussy. I cried from the pain, from the pleasure, from the pure joy of being used by one such as he. Halfway through the second day he released me from my corset and the small plug. He replaced the plug first with himself and then, after he had come, a larger plug. Later, when I could no longer hold in the contents of my bowels, I begged him for release, which he granded after he came again in my mouth. Once I was cleaned out, he again plugged me – with a slightly bigger plug. I would, he told me, be plug by either himself or something else until I entered my own apartment again. I bowed my head and accepted his word. I would be uncomfortable, but not in pain. Part of the discomfort was also from the knowledge that I would be perpetually wet!

To summarize, Lion’s 3 day camp did its work. I’m back at work today, but even though my bottom no longer aches and my nipples are no longer swollen. I do not have his come in or on any part of my body, His presence is still beneath everything I do. I have confidence and poise more than before the camp. Yes, some of my co-workers are still bitches, but I have something secret that they do not – a Lion who cares for me, corrects me, and is always with me.