a harness to ensure it would stay in place as she slept.

I gathered her in my arms and again, we slept. I awoke before her, but the feel of her in my arms was so perfect, I let her sleep on. When she finally awoke, I kissed her then asked if she were tender.

I laughed, then nudged her downward where she sucked my cock until I gave her the first sustenance of the day.

When breakfast was finished I pulled out my special stool from the closet and watched with pleasure as Galatia paled. To her credit, she made no complaint as I s 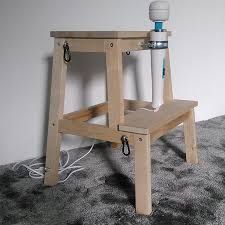 “Promise me you will use your safeword if needed,” I insisted.

I easily pushed two fingers into her hungry puss. She came again, tears running down her face. Then a third finger, then a fourth. She was writhing on bed, soaking the sheets with her wetness.

I cannot describe her beauty as she  came over and over again as I watched my whole hand move in and out of her hole. After a few minutes, I pulled my hand out of her and watched as she collapsed, all tension leaving her body.

I stripped off my robe, my cock flagpole hard, and knelt between her legs. I had left just enough slack in her bonds to be able to lift her hips slightly and enter her ass, this time, barebacked.

I removed her gag and said, “Talk to me.”

She continued to speak in disjointed, begging tones. I pinched her nipples, wanting to make this last, but failed. I buried myself in her, emptying my balls deep within her bowels.

After we had both recovered, I looked at her and asked, “There’s four more hours to go. Are you up for that?”

I laughed, then plugged her ass once again.

“You may be, but I need a break. I’m going to unbind you. I want you to take a nap then a shower. I’m going to read for a few hours. After your shower, Come find me and you can worship my cock and balls. How does that sound?”