I’m nothing if not a woman of my word, so I fully expected Lion to take full advantage of my desire. The “day” began at midnight with him waking me up by licking my pussy. Once I came, he knelt over my face and it was time for me to return the favor. This time, though, his anus was directly over my mouth, and so I stuck out my tongue and began to rim his asshole. Slowly, I ran my tongue up his perineum, then his balls, and finally, he shifted enough so that I could devour his cock. I had him on the brink when he pulled out, spraying his release across my face and neck.  Once satisfied, he snuggled next to me and whispered, “Get some rest while you can. Oh, and get used to the feeling of my cum on your skin. You’ll be wearing it for quite a while.”  Three hours later, he repeated the process. Now, I had dried come stuck to my face, neck, breasts, and hair.

He allowed me to sleep another three hours before again waking me. This time, he put a collar around my neck, attaching a leash to it. I whined at this, and before I could blink, he pulled me to the floor, flipped me over, and walloped my ass with the end of the leash. Just as quick, I was on my knees with his cock in my mouth again. I knew he couldn’t possibly cum after having done so twice, but he fucked my mouth until tears were flowing down my face from gagging so often. Finally, he stood, slapping my face with his wet cock, and scolding me for not being able to get him off a third time.

Yes, this was humiliating. No, it wasn’t my fault. Yes, my p 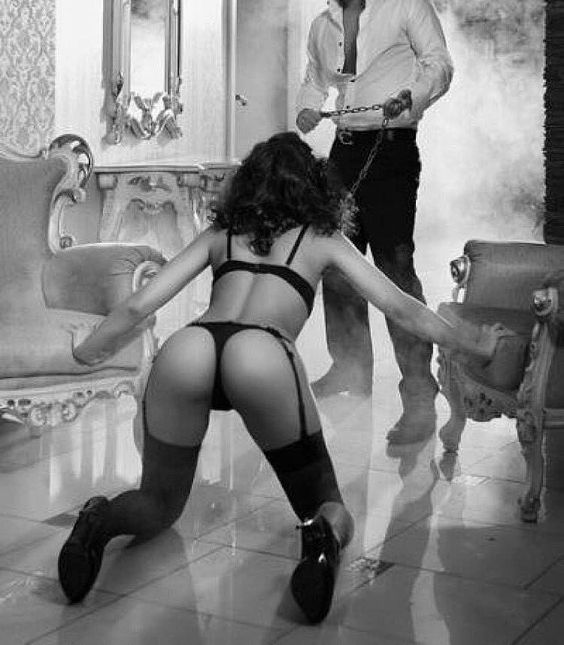 ussy was dripping wet and my heart swelled with love for this man.

He ordered me to dress only in lingerie and heels, then told me that unless otherwise told, I would be following him on hands and knees whenever he held the leash. He might secure the leash at times, which meant that I could sit back but would stay in place until he came for me. Like a staked pet, though, I was not to move without his permission. I was also not to speak unless spoken to, not to eat or drink unless it was offered, and would have to whine (dog like) to use the bathroom. This, however, would be denied as I would NOT be allowed in the bathroom ALL DAY!!! I would be lead outside and have to pee or defecate in the back yard (THANK GOD IT’S TOTALLY ENCIRCLED BY A PRIVACY FENCE!!) In the case of defecation, I’d also have to bag the feces and dispose of it in the trash can. At this point, I was reconsidering my earlier vow.

Five times I had to whine to pee and once to defecate. Each

time, I had to “work” for the privilege by licking My Lion’s shoes until he decided to take me outside. After the humiliating defecation, My Lion wisely decided that since I was nicely cleaned out it would be a fine time to take my ass. This he did, adding some lubricant he had been chilling in the fridge for just this purpose. While he pillaged my ass, he made me answer questions. Whose ass is this? You like my cock in her ass, don’t you, slut? You’re mine to use as I want today, aren’t you? You’re going to suck my cock clean after I come inside of your ass, aren’t you?

This is where I messed up. My answer should have been a simple Yes. Instead, I said, “I thought you weren’t going to come inside of me today.” He began slapping my ass while still fucking me, and said, “You dare to correct me?? You question me today???” Soon, I was crying, my ass on fire. As soon as he heard my sobs, he pulled out and sprayed my scalded ass with his hot cum. Grabbing me by my hair, he spun me around and shoved his still dripping cock down my throat. I gagged, more tears spilling down my cheeks, but soon he slowed enough for me to suck him clean.

Pulling me into his arms while we both stood in the shower, My Lion kissed me, running his hands down my now clean body. When we finished showering, he dried my body and said, “You humble me, love, giving me so much. Tomorrow, I think you’ll need a day of pampering.”

I giggled and said, “Sounds perfect, as long as that pampering means I can finally have your come inside of me.”

He looked at me, startled, the grinned. “I’m pretty sure I can make that happen.”