Smiling, he took my hand, unaware of my ulterior motives. Lion had been working hard all week, coming home to exhausted to do much more than eat the dinner I had kept warm for him, shower, and flop into bed. Today, though, he had a much needed day off and had slept late. Now, he looked well rested and more of himself than he had all week.

We kept a companionable silence while we strolled deeper into the wooded area of our property. When we were in a heavily shaded area, I stopped him. I kissed him and felt his cock harden against me. I stepped back, kicked off my shoes, and pulled the light Jersy dress from my body. Next, I knelt before him, keeping my eyes on his, and unzipped his jeans, releasing his throbbing cock. Beginning at the base, I slowly licked my way up to the crown then back down again, keeping my hands on his balls and my eyes trained upward. His own eyes had darkened.

I opened my mouth, sinking downward, my lips tight against his velvety flesh, my tongue pressed against his shaft. Up and down I sucked, struggling to keep my eyes open and on his. This, however, was soon rewarded as I felt his balls tighten.

“You naughty woman,” he growled, “making me come so quickly.”

“You know I’ll have to punish you now,” he said. “Not only did you make me come quickly, but you haven’t come yourself.”

Lion was a considerate lover, making sure I came several times before he did. Naturally, I had know this 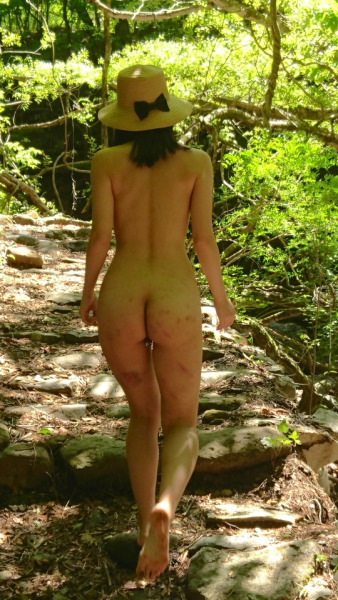 would be his reaction. I grinned up at him. He laughed. Twenty minutes later, I had been thoroughly punished for my wanton behavior. By then, Lion was again hard and so he made took me, making sure I came multiple times. He himself  did not orgasm a second time. Instead he promised that once we returned back to the house he’d make love to me properly in our bed.

“Come. I want you to walk ahead of me, though,” he said, grabbing my clothing. “I want to see thosse beautiful marks I just gave you.”

As my Lion commands, so I do.