Prepare for “Invasion” he tells me. The first “Attack” will come at 4:00 p.m. At first, I was confused. Then I understood. He was going to “invade”. I was at home, hav

ing gotten a sweet schedule from work which actually allowed me four days off in a row. Darkness had been hinting for several months now that he would soon “invade” my most private place – my anus. I shivered, more than a little apprehensive, but began to prepare. My Darkness had shared his fantasy with me some time ago – to plunder my anus completely, leaving my pussy weeping with neglect and need. I’d been actually preparing

for this for some time – working the muscles of my spinchter, doing kegels, eating a diet high in fiber (which I needed to do anyway since I’m prone to constipation when I’m stressed – TMI?). When the “invasion” came, he warned, I’d better make sure I was ready – cleaned and lubed, with plenty of spare lube handy.  He arrived at precisely 4:00, asked if I was prepared, the held my hands, kissing them gently. He told me how proud he was of me, and how grateful that I was will, eager even, to do this for him. His greatest hope, he explained, was that after this invasion, I too would grow to love anal as much as he, embracing the u 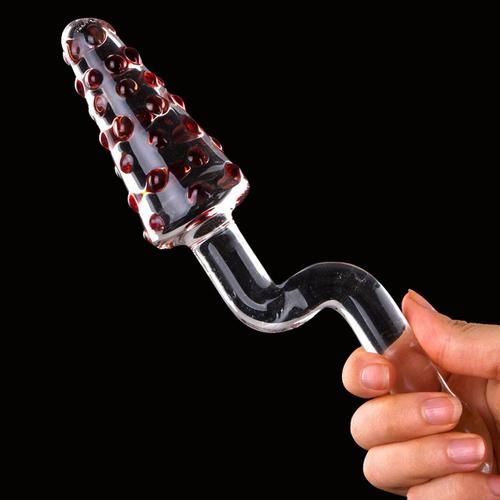 niqueness of the experience, the total giving my of myself, the new level of trust, the eroticism, the humiliation, but the most of all, the love and devotion that this act would embody. His words spread a blanket of calmness over me.

First, I stood for him, stripping naked. He bend me over a kitchen chair, my hands grasping the seat. He spread my cheeks, approving of the lubrication already in my anus. Then, he showed me the glass plug, complete with a glass handle. I gasped and wanted to run, but I said nothing. I let my head drop and my shoulders relax. I jumped when I felt the coldness pressed against my virgin bud. He murmured soothing words and pressed the plug in, slowly, carefully. The sensation was odd, uncomfortable, embarrassing, but not painful in the least. Finally, it was well seated. I suddenly recognized the sweet, pungent scent of my own excitement. Darkness ran his fingers up my slit and chucked. Then, he finger fucked me until I came, drenching his hand with my wetness. He came to stand in front of me, had me suck my own juices from his fingers, then unzipped his trousers. I opened my mouth, eager to take him. As I worshipped his magnificent cock, he bent over me and began to spin the plug. I moaned. My god! It felt amazing!!!!I sucked him with vigor, massaging his balls, wanting more. He pulled out, though, before he came and I cried with despire. He helped me to stand, then picked me up and carried

me to the bed. He lay me face down, my ass lifted by pillows. He did nothing but slowly spin the plug until I was squirming and begging to be fucked. He reminded me that my pussy would be lonely, weeping. The earlier finger fuck was all the action it would receive for the next few days. No. It was ass that would receive most of the attention. Occassionally, he’d use my mouth, but only as the pre-show. Slowly, he removed the plug. He stood behind me, spreading lub on his cock. I was nervous, but so desperate for him, that lifted my hips and begged again. He laughed and eased himself into me. He is much, much bigger than the plug. I cried out a little, sure he was going to rip me open, but he went slowly and my body stretched for him. He pulled out, then in. Out, then in. I began matching his movements, crying – this time with excitement, and faster than I thought possible, I exploded, colors shooting around me as I enjoyed one of the most intense and unexpected orgasms of my life. Before I’d begun my descent, Darkness clawed my back. His cock expanded, had he moaned, pumping his pleasure inside of me. We stayed like that until our breathing returned to normal. Then, he pulled out of me only to replace the plug. I protested, but he said, “Invasion. Unless you have a biological need to evacuate, you will be invaded this entire weekend.” I gaped at him, saying nothing. “Don’t worry. I have several plugs. Some you’ll barely notice, they’re so small and easy to wear. Others, like this one, you’ll only be able to lie or stand. Some will be large and uncomfortable, but have no doubt in your mind. If my cock is not inside of you, something else will be.” But I began, then saw the sterness on his face. He HAD warned me this weekend was coming. “If it becomes too much, use your safeword, but otherwise, your ass is mine.”

One thought on “Invasion”