Kyle planned carefully, knowing he’d have to put on his A game if he were to “beat” Jenny’s budget date of last night. Putting the finishing touches on dinner, he was pretty sure he’d be the winner. Jenny rang the doorbell at 6:00 p.m., right on time. He opened it, handed her one long stemmed black rose – complete with thorns – and kissed her. He led her into the kitchen then whispered, “Clothes.” They had decided long ago to use commands with very few words. His cock surged to life when her eyes widen. She hesitated, but then removed her dress. She was bra-less, something that pleased him greatly. Once she had removed her panties, he held out her chair and seated her at the table, her spectacular breasts clearly visible above the oak table. Her nipples, he was pleased to see, were still slightly swollen from the clips last night. With a flourish, he placed a plate of pasta in front of her along with a glass of cucumber water. They chatted during dinner and laughed often. God, how he loved this, a great dinner and an even greater dinner companion – who was next to naked. Jenny really was his idea of a perfect submissive. Once dinner was complete, Kyle cleared the table and set his ipod. He explained that in the interest of fairness, he had purchased 5 songs just for the evening. Then, he pulled her into his arms and they began to dance. Kyle, not a fabulo 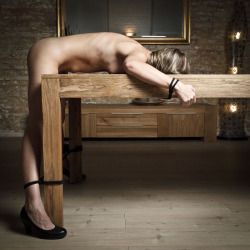 us dancer, nonetheless, swept Jenny around the room. She, on the other hand, loved dancing. she laughed, completely enjoying herself. When the fifth song ended, Kyle once again took her to the dining room table. His eyes darkened and he kissed her – hard, deep. His tongue demanding her undivided attention and submission. by the time he pulled his head up, she was already entering subspace. “Bend and present.” She slowly turned and bent over the table, her feet instinctively moving to the sturdy oak legs. Kyle quickly used soft, new, silken ropes to bind her in place. He leaned over, whispered in hear ear, “Did you notice the rose had been dethorned? You’ll thank me for that.” Then, he slipped the stem into her anus. He must have lubricated it, because it slid in easily. Still, she gasped. Then, he explained that he’d spent part of the day making a new flogger. He’d plucked lavender stems from the garden

them together and would use the bundle on her ass, her thighs, her pussy. He’d continue until all the petals from the rose had fallen. Only then would he take his pleasure of her. Jenny sighed deeply. She loved flowers almost as much as she loved dancing, but more than either, she loved being flogged while bound. On and on he flogged her, the air filled with heady scents of lavender and roses. She cried out, tears washing down her face. She begged for release, which he denied. The lavender flogger didn’t hurt exactly, but it certainly stung and by the time he announced that the last petal had fallen, her bottom, thighs, and pussy were tender, swollen, and sensitive to the slightest touch. She gasped when he removed the stem, slowly, twisting it as he did so. She heard rustling and knew he was finally undressing. Then, he took her. She arched her back, screaming his name. He’d pushed in fully, balls deep, into her well lubricated bottom. She pulled against the bonds, held in place, as the orgasm ripped through her body. He fucked her mercilessly, just how she loved it, until her voice was hoarse from screams and ever muscle in her body ached. She felt him expand even more then release his precious stream into her willing body. With a satisfied smile, she whispered, “You win.”